Based on their respective environments and conditions, the capital city highlights the total from the design of structures such as long tunnels and large bridges to construction management.

The Yamate Tunnel is an underground tunnel located in the route between Ikebukuro and Oi, the circular route. It is a long tunnel with a total length of about 18km, and its length is ranked first in Japan and second in the world. 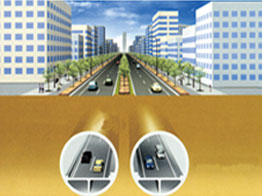 In the construction of the Yamate Tunnel, innovative technologies such as large section shield tunnel construction method and non open cut method are adopted. The large-section shield tunneling method was mainly used in the construction of the Yamate Tunnel to minimize the effect on traffic in existing roads and to reduce noise and vibration in the surrounding area during construction. The outside diameter of the shield tunnels is 11.2 to 13.0 meters. The Rainbow Bridge is a suspension bridge with double decks and spans the first channel of Tokyo Port. The upper deck is occupied by the Route 11 Daiba Line, and the lower one by Port Road, a walkway, and Yurikamome, a new mass transit system. The Yokohama Bay Bridge has double decks and spans the Yokohama international channel. The upper deck is occupied by the Bay Shore Route, and the lower one by the Route 357. The Tsurumi Tsubasa Bridge is a bridge crossing over the Tsurumi Fairway. At the time of its completion, it was the world's largest cable-stayed bridge with single-plane cable stays. The Goshikizakura-Ohashi Bridge is the world's first double-deck Nielsen-Lohse system bridge. It crosses the Arakawa River near the Kohoku JCT.