The Yokohama Bay Bridge is a long-span bridge with a two-level structure that forms part of the Tokyo Bay Road and also the Bay Shore Route. It is a two-layered suspension cable-stayed bridge with a total length of 860m. The construction of Yokohama Bay Bridge was started with the aim of strengthening the function of Yokohama Port as an international port, and connecting the Honmoku futo and Daikoku futo.
Let's look back at the period from the start of foundation work in 1981 until the opening in 1989. 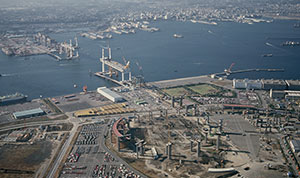 With hopes of many on its back, the opening day was celebrated. The bridge is not just an important transportation route that supports port logistics, but is also a visually impressive symbol of Yokohama. Unlike Rainbow Bridge and Tsurumi Tsubasa Bridge which were named by the public, Yokohama Bay Bridge was given its name in the planning stage of Yokohama City in 1964.
At the time of construction, it was sometimes called the "Yokohama route crossing bridge" or the "Yokohama port crossing bridge", but the original name "Yokohama Bay Bridge" was adopted.
The name Bay Bridge is still cherished. The naming must have held a special place in the hearts of the people.